Posted on December 7, 2018 by thegrailquest

To every success story, there is at least one, usually more than one, story of failure. If Lanval’s fairy did all the right things (see my previous post), the Devil, who adopted the guise of a beautiful forlorn female in the Queste del Saint Graal, did all the wrong things, or, at least, did a few wrong things, which enabled Perceval to escape the Devil’s snare – just in time.

First, the devil chose the wrong romance to inhabit. Lanval is a courtly romance, with just the necessary reference – or reverence – to God rendered at the beginning and finishing lines of the poem, in its English version. The Queste, in turn, is a thoroughly evangelizing story – one scholar even called it the ‘gospel of chivalry’ (Emmanuele Baumgartner calls it ‘l’évangile du classe’). The author could bear no liberties with courtly love; all such unworthy things were to be abandoned in the pursuit of the most holy thing, the Holy Grail, which is nothing else but the pursuit of God. The episode of Perceval’s near escape from the Devil thus illustrates the danger of courtly play and, incidentally, of those damsels and ladies in distress lurking about with tearful requests to make, fine gifts (including excellent horses) to grant, feasts to offer and beds to share. Of course, such luxuries come at a price – and the price is likely to be the knight’s soul.

In the Queste del Saint Graal, the seduction episode is, in fact, divided in two – look how crafty the Devil is, says the moralizing author of the romance. In the first part of the adventure, Perceval’s horse is brutally and unchivalrously murdered just as he is pursuing the White Knight, Sir Galahad. In despair, Perceval spends all night wailing, ready to do anything for a horse. He falls asleep and wakes up, to see a woman, who offers him – lo and behold! – a horse. This is what she says: ‘I would give you a good fine horse which would carry you anywhere you wished to go.’ The horse comes at a price: Perceval must promise to do the woman’s bidding, to which he blithely agrees. Never mind where the horse comes from – apparently, it is a wild horse, or a fairy horse, for, as the conte says: the woman ‘went into the forest and returned presently leading a splendid great horse, so black that he was marvellous to see.’

Although mighty suspicious of the beast – shouldn’t a good horse be white, or at least dappled grey? – Perceval mounts it and… is carried away at what seems literally neck-breaking speed. Again, taking the author’s word for it: ‘he was borne along so fast that he was soon out of the forest and had been carried more than three days’ journey.’ All seems to be going ok, until they come to a wide river, with no bridge, and Perceval does not appear to share his mount’s eagerness to risk their life. Making the sign of the cross, Perceval discovers that his horse is a demon – or a kelpie. The beast ‘shook himself loose from Perceval and dashed into the water barking and crying and finishing his career with shame. And at once the water gleamed here and there with fire and a bright flame, so that it seemed as it were on fire.’

Now, Perceval was left in the middle of nowhere, horseless, foodless and shelterless. Having experienced some adventures, not least of them a battle with a little dragon, he is exhausted and ….hungry!

He is comforted by soul-saving conversations with St Joseph of Arimathea, but the saint does not bother to bring the knight any earthly food. 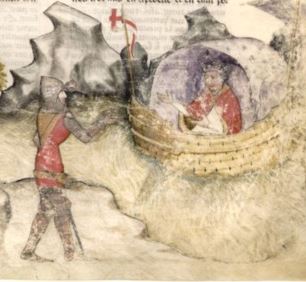 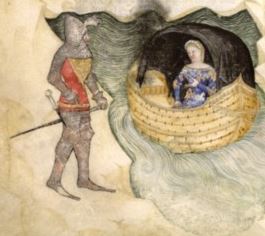 It is just as well that a lovely, stately lady arrives in a ship to tell Perceval about her troubles and ask for his knightly help. All he needs to do is to go and fight for her honour. He gladly agrees. He has recently promised something of the same sort to another lady (something along the lines ‘he would do what she asked of him’), but what the heck, knights errant promise things to people asking for things, especially ladies, all the time.

But, to fight, he needs to be physically reinforced, doesn’t he? So the lady invites him to her tent – as the day is much advanced, it is quite hot, etc. You recognize the pattern, don’t you? We have already seen this setting in Lanval story! Perceval eats and drinks not a little of spiced wine and other alcoholic beverages. Slightly tipsy and thoroughly enchanted by the lovely female, he accepts her offer to go to bed.

He is just about to remove his underwear as he chances to look at his sword. The hilt is cross-shaped, and Perceval automatically makes the sign of the cross. And the devil disappears, smelling of sulphur and shrieking delirious curses to the effect that Perceval broke his promise…

One wonders what would have happened if Sir Lanval made the sign of the cross as he was about to neck with Triamour. Probably nothing, but one never knows…

Being a horse freak, I may be biased, but it seems to me that one of the key clues to discriminating between ‘good’ and ‘bad’ seductresses, in this case, is the quality of their gifts, namely, horses. Triamour gives Lanval a white warhorse, which not only is obedient to his commands but even fights for him when the rider dismounts, making good-aimed kicks at Lanval’s enemies. Perceval’s steed is most unhelpful: it does not know the basic command of ‘stop’. The colour is suspicious, too: black is the colour of the devil, and medieval people appear to have had some reservations about owning black horses, just as people today have about meeting black cats. The Properties and Beauties of a Good Horse, listed in a fifteenth-century manuscript, include a rather unfavourable description of a ‘coal black horse’: ‘A coll blacke horse Þt berith no white marke is perilous / for & he contynewe longe wt eny man he woll drenche / his master oÞer ellis sle him oÞer ellis do hym some manere of myschefe.’ (from a 15th-c. treatise on horse, edited by Kelly-Anne Gilbertson) Just what happened to Perceval: the coal black horse nearly drowned him, failing which it tried to break his neck by tossing off the rider.

Anastasija Ropa holds a doctoral degree from Bangor University (North Wales), for a study in medieval and modern Arthurian literature. She has published a number of articles on medieval and modern Arthurian literature, focusing on its historical and artistic aspects. She is currently employed as guest lecturer at the Latvian Academy of Sport Education. Anastasija’s most recent research explores medieval equestrianism in English and French literary art and literature, and she is also engaged as part-time volunteer horse-trainer. In a nutshell: Lecturer at the Latvian Academy of Sport Education Graduate of the School of English, University of Wales, Bangor. Graduate of the University of Latvia Passionate about history, particularly the Middle Ages A horse-lover and horse-owner
View all posts by thegrailquest →
This entry was posted in Arthurian Literature, equestrian history, Gender and Literature, Medieval animals, Medieval horses, Medieval Literature and tagged Arthurian Literature, Perceval, Queste del Saint Graal, romance, warhorse. Bookmark the permalink.